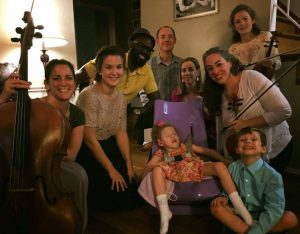 Faith*, who is eight-years-old, wanted to experience an SLSO concert.

She was born with SOX2 anophthalmia syndrome. The genetic condition left Faith blind and with limited mobility.

Faith’s mom, Bridget*, said that life or her daughter can be a “struggle,” but music has been a “great motivator.”

“To see the string quartet and vocalist so dedicated to making this happen for her was special to us,” Bridget said.

“It really was it was an honor to play for her,” Brooks said.

“Anytime we can touch anyone it is special, but to know that this was Faith’s dream, was a real high point for me,” Guterman Chu said.

Faith’s Make-A-Wish also included a private concert in her home on October 4. The musicians performed two pieces of music, including a piece by Tony Bennett.

“This was just a great opportunity to see how much Faith is loved by so many people,” Bridget said. “It was the right wish request.”

*For privacy reasons, the SLSO is not releasing the family’s last name. 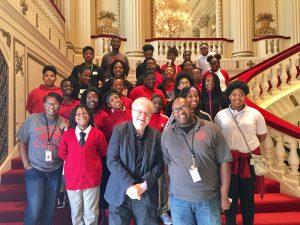 Each spring, 3rd, 4th, and 5th graders take over Powell Hall for the St. Louis Symphony Orchestra’s Link Up concerts.

The students participate in the concerts. They play recorders and violins along with the orchestra. The students also sing and dance.

The concerts are the pay off for months of hard work that starts each fall in greater St. Louis area elementary schools.

According to 5th grade Hazelwood student Jaylah Burton, the program offers her a way to connect with her parents.

“My mom and my dad played instruments,” she said. “I wanted to play an instrument too.”

Link Up provides music educators with specialized curriculum that prepares students for the concerts.

“Studies have shown that kids that play instruments do better on tests and succeed in life,” Hazelwood Orchestra Teacher Kimberley Jackson said. “This program is very beneficial for their development.”

The curriculum comes from the Weill Music Institute at Carnegie Hall.

The help from the SLSO and the curriculum is free.

The SLSO is searching for more schools in the region to Link Up with this school year. “When she went on stage she had this presence,” De Geest said.

“I could not take my eyes off her,” De Geest said.

After the performance, De Geest asked New for an autograph.

“I just really wanted her autograph.” De Geest said. “She also gave me her conducting stick, which was really amazing.”

It was a small gift, but it is inspiring a big dream.

“I want to be a conductor someday,” De Geest said.

In the Spring of 2017, New invited De Geest to a St. Louis Symphony Youth Orchestra rehearsal.

De Geest brought a violin, a music folder, and a desire to learn.

“She has so much energy and potential,” New said. “She reminded me of myself when I was that age.”

New’s main role with the St. Louis Symphony is to conduct concerts.

“That is how I fit in to music, and how I can best express the music that I love.”

However, New’s impact is not confined to the stage at Powell Hall.

“She inspires many people out there,” De Geest said. “She helps other people with their dreams.”

The St. Louis Symphony, Circus Flora, and Build-A-Bear Workshop are partnering for series of performances for children at area hospitals.

Violinist Angie Smart and Claire “the Clown” Wedemeyer from Clowns on Call provide the entertainment. The performances are a mixture of music and comedy.

Smart plays crowd favorites and Wedemeyer keeps the children laughing. It is a routine Smart and Wedemeyer have perfected. The pair have been performing at area hospitals since 2012.

In addition to the entertainment, each child receives a stuffed-animal from Build-A-Bear Workshop.

Kira Stout, 9, attended one of the performances at Mercy Children’s Hospital in 2016. Her father, David Stout, said the performance served as an entertaining escape.

“When she heard they were here (at Mercy Children’s Hospital) she got very excited and wanted to come down and see it,” Stout said. “She just loved it.”

The hospital performances are part of the SymphonyCares program.

The goal of the program is to enrich people’s lives through the power of music.

Hava Polinsky, 17, shed tears of joy when she left the stage at Powell Hall on New Year’s Eve.

“It was just so emotional,” she said while wiping tears from her eyes.

She was poised, precise, and professional on stage.

Polinsky has been honing her skills with the Youth Orchestra for the last for six years.

However, the teenager was visibly nervous in the moments leading up to her performance.

She paced back and forth as Music Director David Robertson began her introduction.

That is when the STL Symphony’s Jack Snider took charge.

The veteran stage manager gently put his hands on Polinsky’s shoulders, looked in her eyes, and said “you look beautiful.”

“That Polinsky was good,” one audience member said.

It was the perfect way for the STL Symphony to ring in the new year.

Music from Syria, Somalia, and beyond filled the SLACO Community Center in North St. Louis during a recent concert.

The Strings of Arda ensemble traveled to the community center to take more than 30 immigrants and refugees on a musical journey. The ensemble consists of six musicians from the St. Louis Symphony. Most of the people who attended the concert were from Syria and Somalia.

Many of the families spent years living in refugee camps before coming to the United States. The resiliency of the families nearly brought the leader of the ensemble, Christian Woehr, to tears.

“If I think about it I am almost overwhelmed,” Woehr said. “It’s quite moving to me.”

The concert was part of the STL Symphony’s comprehensive Music Without Boundaries program.

The goal of the concert was to help families feel welcome in St. Louis and connect on a personal level with the region through music from around the world.

“It’s always got a great groove, and it’s such a core part of what really makes a people a people,” Woehr said.

“For them to have an opportunity to hear a concert with world class musicians playing music that is from around the world, and including their own country, was extremely moving for the families,” Barker said.

The music is a gift that serves as a comforting connection to the families’ history, and a warm welcome to their future.

“It made them feel much less isolated than they normally do,” Barker said.

Additional STL Symphony Music Without Boundaries concerts are planned at SLPS Nahed Chapman New American Academy on March 13, Macklind International Senior Center on March 15, and at the International Institute of St. Louis later in the spring.

Music Without Boundaries also funds transportation and ticket costs for immigrants and refugees to attend concerts at Powell Hall.